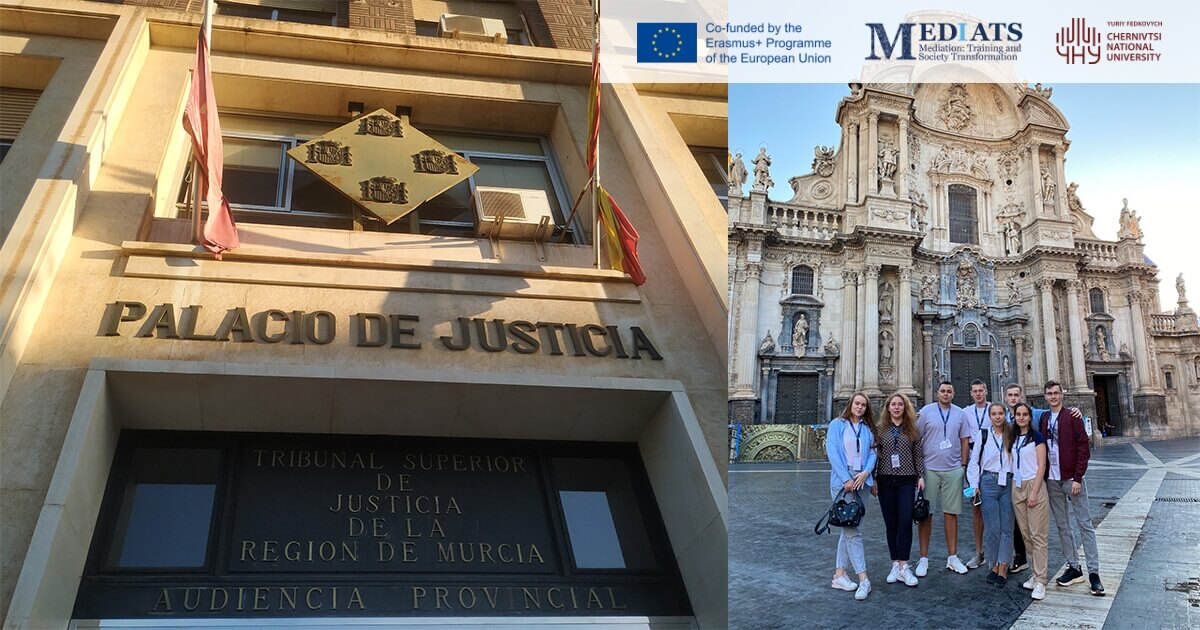 We, interns of EPP “Mediation” are extremely pleased to state the fact that in addition to lectures and practical classes, the internship program at St. Anthony’s Catholic University includes study tours every Wednesday. Therefore, on October 20, 2021, we visited the Justice Center of Murcia, as well as made a tour of the city.

It was an extremely interesting experience since the Spanish judicial system is very different from the Ukrainian one. They have established close cooperation between the judiciary branch and mediation. Judges often decide to refer disputes to mediators if this tool of resolving the conflict is more effective for the parties.

Mediation sessions are held in the Center three times a week by mediators who work on a voluntary basis. Generally, there are several dozen mediators in the Center, more than thirty of whom are specialists in family cases.

The Center has specially equipped rooms for mediation, as well as play areas for children who come to mediation sessions with their parents.

Most disputes settled through mediation in the Center for Justice have resulted in mediation agreements. However, results in administrative cases are less successful, only four agreements were concluded during the last few years. The reason is the unequal position of the participants.

Another feature of the Spanish court system is that when filing a lawsuit, the parties are invited to reach an amicable settlement, and if they agree, the court staff helps them prepare the contract. We, as interns, were lucky to see how such a procedure takes place in labor disputes.

Also during the tour, the interns attended a court hearing in a criminal case. In addition, the organizers conducted a tour of the court, which deals with issues related to the pre-trial investigation (the court performs functions similar to those of an investigating judge in Ukraine). This court works around the clock and without days off. Persons detained for criminal offenses in respect of whom a preventive measure of detention has been chosen are in prison, which is located on the territory of the Center (analogy with the Ukrainian pre-trial detention center).

The tour finished with a mediation simulation of inheritance law, which, incidentally, is significantly different from the Ukrainian. Under Spanish law, if the testator was married at the time of death, the other spouse receives half of the joint property. The remaining 50% is divided into three equal parts: one third is divided between children, equal shares, the other third is reserved for children, but can be distributed equally or unequally according to the instructions of the will, and the last third can be freely disposed of according to the will.

The scenario of mediation simulation was built on these features of the inheritance legislation. Because disputes in this area are quite common in Spain.

Thus, the program of the third day of the internship was very intensive. And the tour became a great opportunity to better understand the features of the Spanish judicial system, the mediation process, and the specifics of the law.